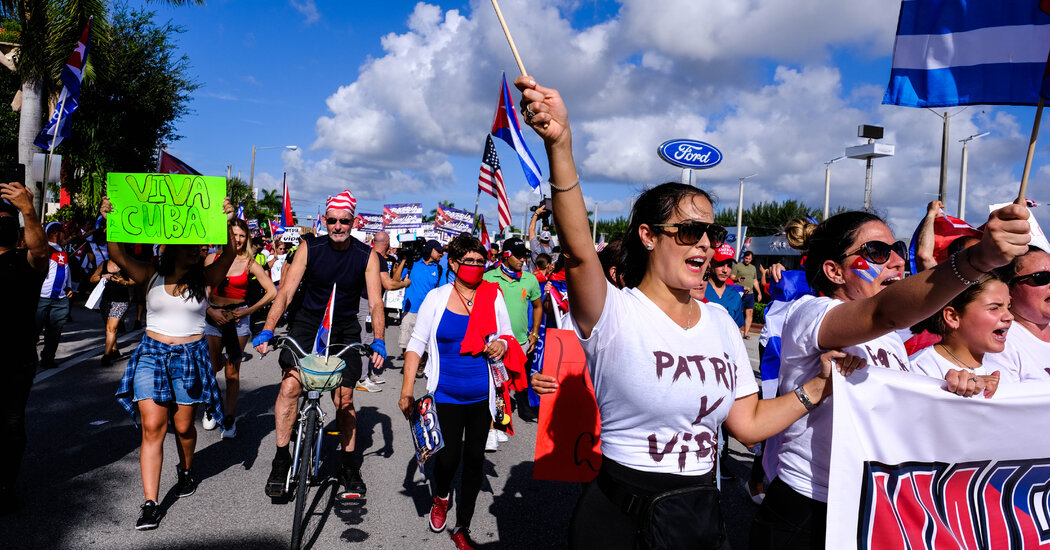 MIAMI — The moment that Cuban exiles in Florida have so fervently ached for over the past six decades did not come when the Soviet Union fell in 1991 or when Fidel Castro died in 2016. It arrived, to their surprise, last Sunday, when Cubans on the island rushed the streets to denounce a Communist government that has left them oppressed, sick and hungry.

Finally, exiles thought, the Cuban people were taking matters into their own hands.

The uprising, led by artists and other young activists on the island, inspired thousands of their relatives, friends and former countrymen to protest in solidarity in Miami, Tampa and other cities in Florida, where three generations of exiles and their progeny have dreamed of a free Cuba.

Even as the protests in Cuba have appeared to quiet down following the arrests of many protesters, the gatherings in Florida, including large ones in Miami, continued throughout the week. The flash of unrest re-energized exiles’ hopes for an end to the Communist regime, a cause that had, to some extent, languished after so many years of dashed hopes.

“I never thought that this day would come,” Melisa Luis, a 19-year-old college student who arrived in the United States from Cuba four years ago, said at a small protest outside of Miami City Hall on Thursday.

The giddy anticipation, especially from younger people like Ms. Luis, that real change might happen on the island has been tempered by wariness, especially from older exiles, that this may be one more disappointment — a momentous event, to be sure, but not yet the beginning of the end.

“We’ve finally had an awakening: It’s an inflection point,” said Santiago Morales, 79, a veteran of the Bay of Pigs invasion that failed to depose Mr. Castro in 1961. Mr. Morales was captured and spent 18 years in Cuban prisons. “But revolutions don’t fall. They wither.”

And in Miami, the recent events have become ensnared — as they always do when it comes to Cuba — in divisive U.S. politics.

In some ways, the past six days were quick to change some entrenched hard-line attitudes in South Florida’s Cuban diaspora. Not long ago, in December 2019, the city of Miami pulled the reggaeton group Gente de Zona from a big New Year’s Eve concert because it deemed its members to be too friendly with the Cuban regime. Other Cuban artists had been repudiated in similar fashion in Miami over the past few decades.

In an important shift, however, the group starred in a concert on Wednesday sponsored by a Miami city commissioner in front of the iconic Versailles Cuban restaurant near Little Havana. Their performance was a sign of how the diverse Cuban anti-government movement has drawn from beyond the traditional exile community.

The group, along with other artists, performed “Patria y Vida” (Homeland and Life), the rap song that has become the anthem of Cuba’s dissidents.

But other facets of the longstanding Cuba fight were unchanged. Mayor Francis Suarez of Miami told Fox News on Tuesday that the United States should explore potential military action with allies in Cuba, a suggestion that riled Cuban Americans like Dr. Bustamante who have studied the island’s historical struggles over its sovereignty.

“This is the kind of thing that the smartest voices in civil society in Cuba know is really foolhardy,” Dr. Bustamante said.

The Cuba question remains foundational to the public discourse in Miami-Dade County, the most populous county in the nation’s biggest traditional presidential battleground state. Cuban Americans who immigrated in waves after the 1959 Cuban Revolution helped grow the region and over time came to dominate its politics and power spheres.

This week, the political right and left jostled to show their support for the island’s protesters. Gov. Ron DeSantis of Florida held an event in Miami featuring Cuban dissidents and other Republican politicians. (“Cuba’s closer to Miami than Tallahassee is, or Orlando,” Mr. DeSantis noted.) The next day, three Democratic elected officials put together an event of their own, inviting some of the same dissidents.

Mr. DeSantis demanded that the Biden administration work to provide Cubans with reliable internet, which the Cuban government had shut down. Democrats urged President Biden to visit South Florida in recognition of the moment’s importance.

“The president himself needs to engage in this golden, historical opportunity to be the president that presides over the liberation of Cuba,” said Fernand R. Amandi, a Cuban American Democratic pollster in Miami. Mr. Biden, he added, should not “squander that which has been the desire of 12 American presidents, dating back to 1960.”

The shift of Hispanic voters toward Republicans is “already a problem” for Democrats, said Commissioner René García of Miami-Dade County, who is also the chairman of the Miami-Dade Republican Party. “If they continue down that path, it’s going to be very difficult for them to make any inroads here in South Florida.”

On Thursday, when the national Black Lives Matter organization issued a statement calling for an end to the U.S. trade embargo against Cuba without acknowledging protesters’ demands for freedom or the police brutality they faced, many Cuban Americans reacted with disappointment and hurt.

“You have to be completely insensitive and not have any notion of history to publish a post like that in a moment like this,” said Laura Díaz, a 37-year-old graphic designer who left Cuba six years ago and was granted political asylum in the United States.

The statement may have cost Democrats her vote. After becoming a U.S. citizen, she intended to back mostly Democrats over their positions on health care and education.

But the events of the past few days have made her seek leaders willing to strongly call out Cuba’s authoritarianism and human rights abuses. She appreciated that Senator Marco Rubio, a Florida Republican, wrote on Twitter that his office would be ready to help Black Lives Matter organization leaders “emigrate to Cuba.”

“No one is looking out for those poor innocents who had the courage to rise up against the huge empire that is the Cuban government,” she said, referring to young protesters on the island, many of them Afro-Cuban, jailed by security forces since Sunday.

The push for change in Cuba has “always been this white, Cuban American, male-dominated image,” said Mike Rivero, a founding member of Cubanos Pa’lante, an organization that has been raising money to pay for Cubans on the island to refill their prepaid cellphones so they can stay in touch with the rest of the world. “This is not that, and to me, that’s a beautiful thing. It’s coming from within Cuba, from a very diverse, very vocal and very unafraid group.”

Former Representative Ileana Ros-Lehtinen, a Republican, said that the generational shift fighting for a free Cuba in Miami had been refreshing.

“For so many years, and decades even, one would hear the same voices on Spanish language radio and TV shows calling for libertad,” she said in an email. “We senior citizens used to worry whether the new arrivals would have the same fervor for change, and we clearly now see that there was no need to worry.”

At the protest outside Miami City Hall, Ms. Luis, who is an aspiring doctor, said she was enraged by video of an operating room with a leaky ceiling in a Cuban hospital.

“Nobody deserves to be treated like that,” she said. “We want to be able to go back to our country. But we are tired.”

Apple Inc. has scaled back ambitious self-driving plans for its future electric vehicle and postponed the car’s target launch date by about a year to … END_OF_DOCUMENT_TOKEN_TO_BE_REPLACED